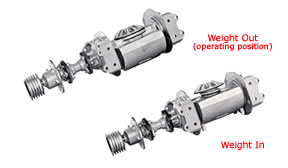 The vibration is produced by the centrifugal force generated by a very heavy weight mounted on a rotating shaft and held almost in balance at low speedds by a large coil spring, eliminating overthrow when starting and stopping.

These color coded diagrams will show you how it works:

A weight (red) is held in balance through a central unit (green), and attached to a cap (orange) by a bolt (yellow). The weight is held close to the central unit by the force exerted by a large coil spring (blue). As power is supplied to the shaft (purple), this entire assembly turns with it. Since the weight is held in balance around the shaft, overthrow during startup is eliminated.

The weight is connected via a bolt to a cap. This cap not only stops the weight, but is attached to the bolt by a threaded nut at the end. By simply adjusting this nut, one can control how far out the weight will go, and thus how much vibration is sent to the deck.

Vibration is produced by centrifugal force generated by a very heavy weight mounted on a rotating shaft and held almost in balance at low speeds by a large coil spring, eliminating overthrow when starting and stopping.

When a speed of several hundred R.P.M. is attained, the centrifugal force of the weight overcomes the force exerted by the coil spring. The weight moves out into operating position against a cushioned stop. The resulting vibration is very powerful and will not dampen out under the heaviest loads.

The distance the weight moves out is controlled by a large adjustment nut, making it simple to change the aptitude of vibration by screwing the nut in or out. This makes it possible to select the proper vibration to handle varying operating conditions.